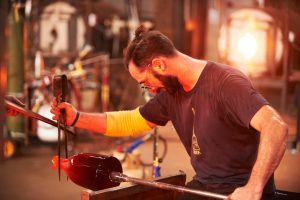 Just when you thought TV couldn’t possibly come up with another reality competition series, Netflix pulls one out of the furnace.

Premiering Friday, the Canadian production Blown Away isn’t likely to rival Project Runway or Top Chef in the ratings department, but its unique subject matter might draw a viewer or two in St. Petersburg, which is starting to become known, in certain circles, as the Glass Coast.

Blown Away pits 10 glass blowers against each other in THE FIGHT OF THEIR LIVES (I made that last part up). Indeed, it’s a competition series (10 half-hour episodes, all streaming starting Friday) in which the young artists go head-to-head to see who can come up with the most beautiful piece of art, decided by a panel of “expert judges,” and earn the distinction BEST IN BLOW (that, I didn’t make up).

The producers, with support from the Corning Museum of Glass, built a special giant-sized hot shop (that’s the room where glass artists heat, blow and form their work) to fit the lights and the cameras and, presumably, all the drama, stress and in-fighting that goes with such things.

Art, of course, is not a competition. If nothing else, this series – hosted by one-time America’s Got Talent contestant Nick Uhas – looks like it’ll feature some wonderfully-produced (and carefully edited) video of the art glass-making process.

“Just from the mere fact that these great artists are coming together for whatever contest they’re putting them through, it should be interesting,” he explains. “Hot shops are an interesting thing to watch, teams working together.”

Regional artists Babette Herschberger and Ry McCullough are eatured in Tongue & Groove, opening tonight with a 6-9 p.m. reception at the Creative Pinellas Gallery, 12211 Walsingham Rd. in Largo. Katherine Gibson of Arthouse3 will join the artists for walk-through tour and talks at 6:30 and 7:30 p.m.

Friday from 6 to 10 p.m., Mize Gallery’s got a reception going on for the July exhibit. Sup Cones 2 brings in artists whose works fuse hip hop and ice cream. The Clara Rose Ice Cream Truck and Nah Dogs Vegan Hot Dog Cart will be on site for your pleasure.

July 13 is Second Saturday, and that of course means more than 40 galleries and studios are going to be open and looking to welcome you, from 5 to 9 p.m., with a free trolley tour. The monthly  Second Saturday ArtWalk is a great way to get up close and personal with many of the talented men and women whose creative spark helps turn the St. Petersburg engine. You can walk (if you dare) or dive it, too; here’s the official Arts Alliance map.

Beyond the Boundaries of Color: Rediscovering the Senses is an exhibition of brightly-colored abstract paintings by Angela Alvarez, opening with a reception Saturday during ArtWalk hours, at the Tully-Levine Gallery in the Warehouse Arts District’s Arts Xchange facility. The Cuban-born Alvarez paints brushless, using rags or her fingers and hands to connect with the canvas or the metal.

A couple of Tampa Bay’s professional theaters are starting to rev up the engines: freeFall’s take on the classic musical Pippin (which we wrote about here) doesn’t officially open until Saturday night, but there are preview performances Friday at 8 p.m., and Saturday at 2. Both previews are sold out, but a handful of tickets remain for the actual opening, and for Sunday’s matinee. It seems there’s a buzz about this production, which runs Wednesdays-Sundays through Aug. 11.

Sarasota’s Dean Johanesen and the 24-Hour Men, tonight at the Palladium, are three guys (acoustic guitar, standup bass and drums) with a fast-moving show of swinging, toe-tapping American music, presented in the style of a 1920s Speakeasy.

Shakespeare scholar Veronica Leone Matthews can play “Six Degrees of the Bard” with just about any subject; the latest event from the director of the St. Petersburg Shakespeare Festival takes place Sunday at the James Museum of Western and Wildlife Art. Shakespeare on the Frontier (free with museum admission, at 3 p.m.) will explore the ways in which Will’s works, avidly read by many in the Old West, affected and shaped that segment of American history.