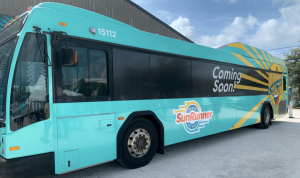 Local officials unveiled the new name and brightly colored logo at a press conference in the Grand Central District Wednesday morning, just steps from one of the 16 future stops along the 10.3 mile route.

“If you’re going to move forward as a region in terms of quality of life and economic development, transit is at the heart of it,” said St. Pete mayor Rick Kriseman. “Having a first-of-its kind transit here that goes from St. Pete to the beaches, where so many of our residents work – they now will have an easier way to go back and forth to work. Visitors who come to this region to stay on beautiful St. Pete Beach will have an opportunity easily to not only visit the beach, but also visit us in downtown St. Pete.”

PSTA CEO Brad Miller said the SunRunner will act as a train of sorts, with raised platforms that will allow people in wheelchairs, families with strollers and bike riders to easily hop on and off. Instead of paying upon boarding, riders will be able to pay on their phones or at the pay stations located at each stop. The buses will run every 15 minutes, taking passengers from downtown to the beach or vice versa in under 35 minutes.

“We haven’t seen this type of mass transit in the Tampa Bay area ever,” said Miller, who expects the SunRunner to attract a number of first-time riders. “We think it will be a different type of experience.”

In addition to an enhanced rider experience, the rapid transit project will also include a public art component. The Art in Transit project will feature glass work by local artist Catherine Woods at bus shelters throughout St. Pete. Each shelter’s design will reflect the unique characteristics of the neighborhoods and businesses districts in which they’re located, and will be functionally integrated into the physical design of each station.

Pinellas County Commissioner Janet Long acknowledged the long journey to get to this point in the project, which has been a topic of discussion and debate for more than a decade. The project received a huge financial boost when it received $21.8 in federal funding in June. The remainder of the $43 million budgeted for the project comes from the Florida Department of Transportation, the city of St. Petersburg and PSTA.

“This is only the beginning,” she said. “It’s the very first step toward a regional connection for St. Petersburg and for Tampa Bay.”

Kriseman agreed, saying that it’s his dream to see this type of premium transit connecting areas as far north as Wesley Chapel in Pasco County to downtown St. Pete and beyond.

Groundbreaking on the project is scheduled to begin in late July or early August, Miller said, with the goal of completion in February 2022. PSTA has ordered nine new buses to serve the route, outfitted with features such as WiFi. They are slated to arrive in 2021.

Although the project has many fans, it also has its share of detractors, including some residents of St. Pete Beach who worry about increased traffic coming to its already busy streets.

Mayor Alan Johnson said he appreciated the modifications that have been made to the project to address these issues and agreed that mass transit is needed. However, he said the response from residents is still “very negative,” likely due to the current Central Avenue Trolleys that sometimes block traffic.

He’s hopeful that residents will change their minds once they see how the SunRunner operates, and said perhaps the SunRunner will one day be able to replace the trolleys altogether.

Jaymi Butler began her writing career as a newspaper reporter in Savannah, Georgia. Her adventures continued in South Carolina and finally brought her back to her home state of Florida. When she’s not writing or playing word games on her phone, Jaymi can probably be found horseback riding, checking out new restaurants, and spending time with her family, friends, and any dog that happens to be nearby.