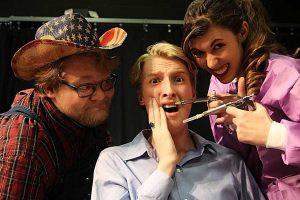 In “Drilled!” at the Palladium: Mario Gonzalez, Chris Loving and Bailee McQueen. All photos provided by Bill Leavengood.

It was Bill Leavengood’s dental hygienist, of all people, who planted the seed for his newest play. “Hey,” she’d said as he climbed out of the chair, “you ought to set a musical in a dentist’s office.”

Leavengood, whose previous works have included Crossing the Bay and Webb’s City: The Musical, considered it a terrible idea … at first. Then it grew on him until he couldn’t let it go. “I thought you know, I can make fun of everything ridiculous going on in our county through a visit to the dentist,” recalls the St. Petersburg playwright. “And that’s where it all started.”

Where it all wound up was Drilled!, with book and lyrics by Leavengood, music by Constantine Grame. The all-original “rollicking song and dance political satire” begins a four-performance run Thursday at the Palladium Theater.

It tells the hard-knocks story of Larry the Laborer, your average Joe-the-Plumber American, who becomes the unwitting mascot of the GOP. Larry, the victim of broken campaign promises, loses both his job and his marriage. And then comes down with a terrible toothache.

“And the only place that’ll take his lousy insurance,” Leavengood explains, “is a place called the Smile Factory, which is an international conglomerate of dentists’ offices.” 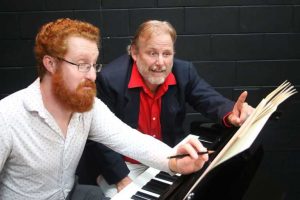 Grame (left) and Leavengood at work.

There’s a lot of singing and dancing in Drilled!, which Leavengood declares “the most ridiculous musical that you will ever see.” At its heart, however, it’s a barbed sendup of the current political system – both the left and the right.

“And I wanted to make fun of fanatics on the left and the right who somehow think their continued fanaticism is going to change things, instead of the 80 percent of us in the middle trying to come to some agreement where we can move forward in a positive way.”

Except for a jolly song of betrayal called “Bushed and Trumped,” there are no mentions of the White House’s current occupant: Drilled! Is an equal opportunity (ie both red and blue) satire. “We think people are going to love it, but it is a strange one. It gets progressively stranger.”

Leavengood, a prolific and award-winning playwright, has been teaching Theatre, Playwriting and Film at Shorecrest Preparatory School in St. Pete for 20 years. In addition, he is the Adjunct Professor of Playwriting at the University of South Florida in Tampa.

His 2005 show Crossing the Bay, an historical musical about the Pinellas peninsula in the 1890s, will be re-mounted in September (in a scaled-down “concert version”) at the Palladium.

The music for both Crossing the Bay and Webb’s City was composed by Lee Ahlin, who retired before Leavengood dreamed up Drilled! Constantine Grame is a Tarpon Springs-based composer.

Leavengood promises he didn’t write his dental hygienist – she’s also his biggest fan – into the story. “My dental hygienist is this warm, bubbly person,” he says, “and the hygienist in the play, she basically belongs in the Third Reich. In fact, she’s German.

“I don’t want to give away too much, but there are certainly lots of surprises having to do with pain. That’s all I can say.”