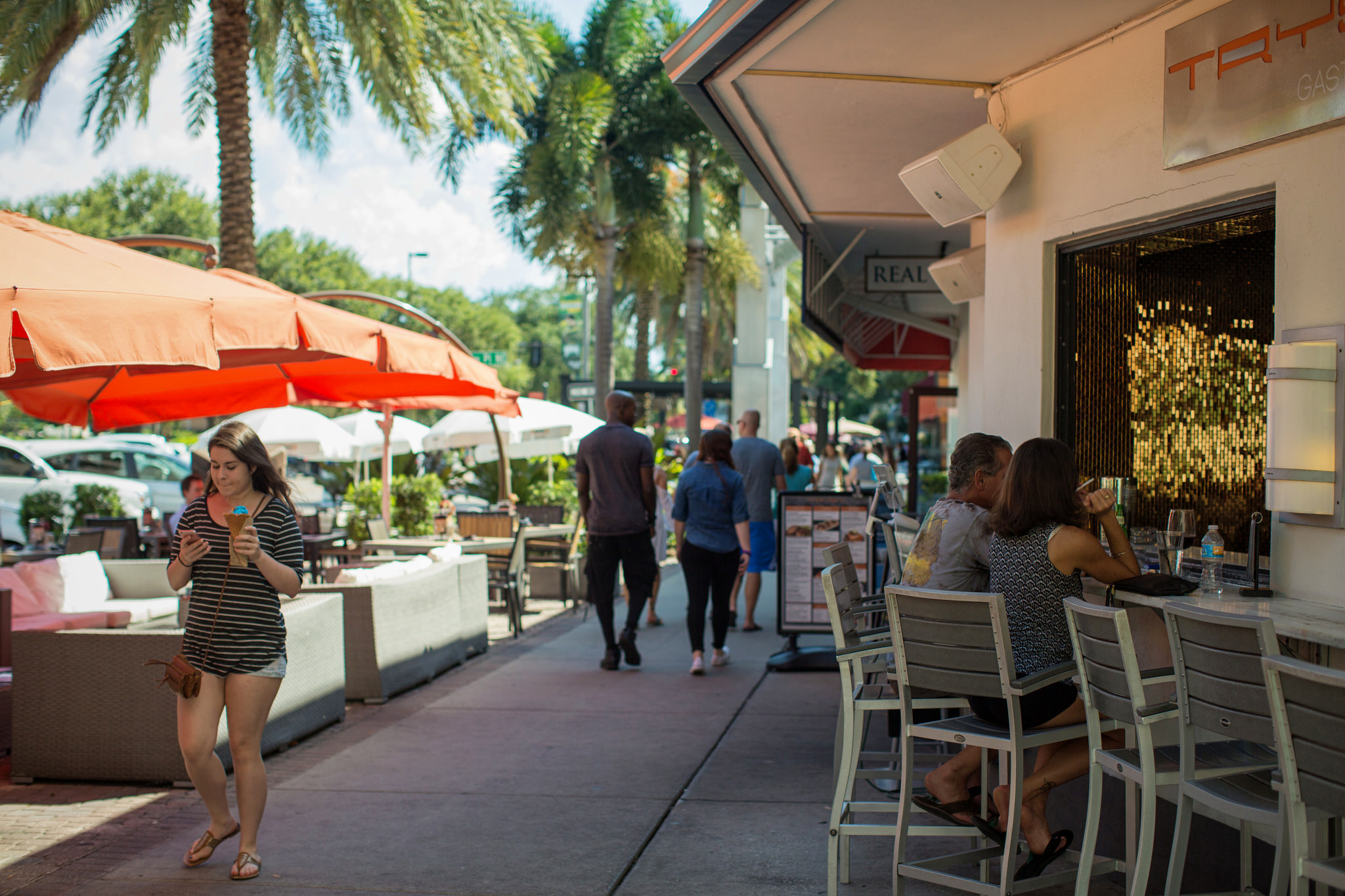 Paris cafés, New Orleans bars, New York restaurants, London pubs. It’s not just the coffee, the cocktails, the bites and the brews that draw people to these places. You won’t necessarily find it mentioned in the Fodor’s guidebook, but the spots have a true sense of character where the real attraction is the people watching.

I moved here in 2001 which, in a city full of transplants that arrived yesterday, practically makes me a local, right? When I got here Sundial was the brand new Baywalk, where you had cocktails at “Dan Marino’s” or burgers at Johnny Rockets (anyone remember that?). There was a Cadillac dealership where the Publix now stands, and basically nothing to do south of Central Avenue.

On Central Avenue, A Taste for Wine was a newcomer, taking a risk that someone might stick around for a glass of vino after work and the sidewalks went dark past 3rd Street. Along Beach Drive there was the stalwart Moon Under Water, a motel, a handful of quiet boutiques, and a place called Spanky’s Dysfunctional Family Restaurant (which I went to with great anticipation, only to find that it was their closing night – everyone was in togas). And here’s the thing, even with that smattering of nightlife, I thought, “Hey, this place is pretty cool. The people and the vibe are interesting.”

The Beach Drive of today is unrecognizable from those days, and I’m not just talking about condos. You don’t have to sit in a restaurant, bar or coffee shop for very long before you start seeing some interesting characters. The writer in me loves this.

There’s no bad time to people-watch at the Vinoy, but the BEST time is during the holidays. Grab your favorite beverage on any given evening in December and watch as guests from company holiday parties come and go. You’ll see everything from 1980s’ sequins to bolo ties, and pickup trucks to Bentley’s, as you enjoy cool weather and beautiful Christmas decorations in a setting that evokes the Roaring Twenties. 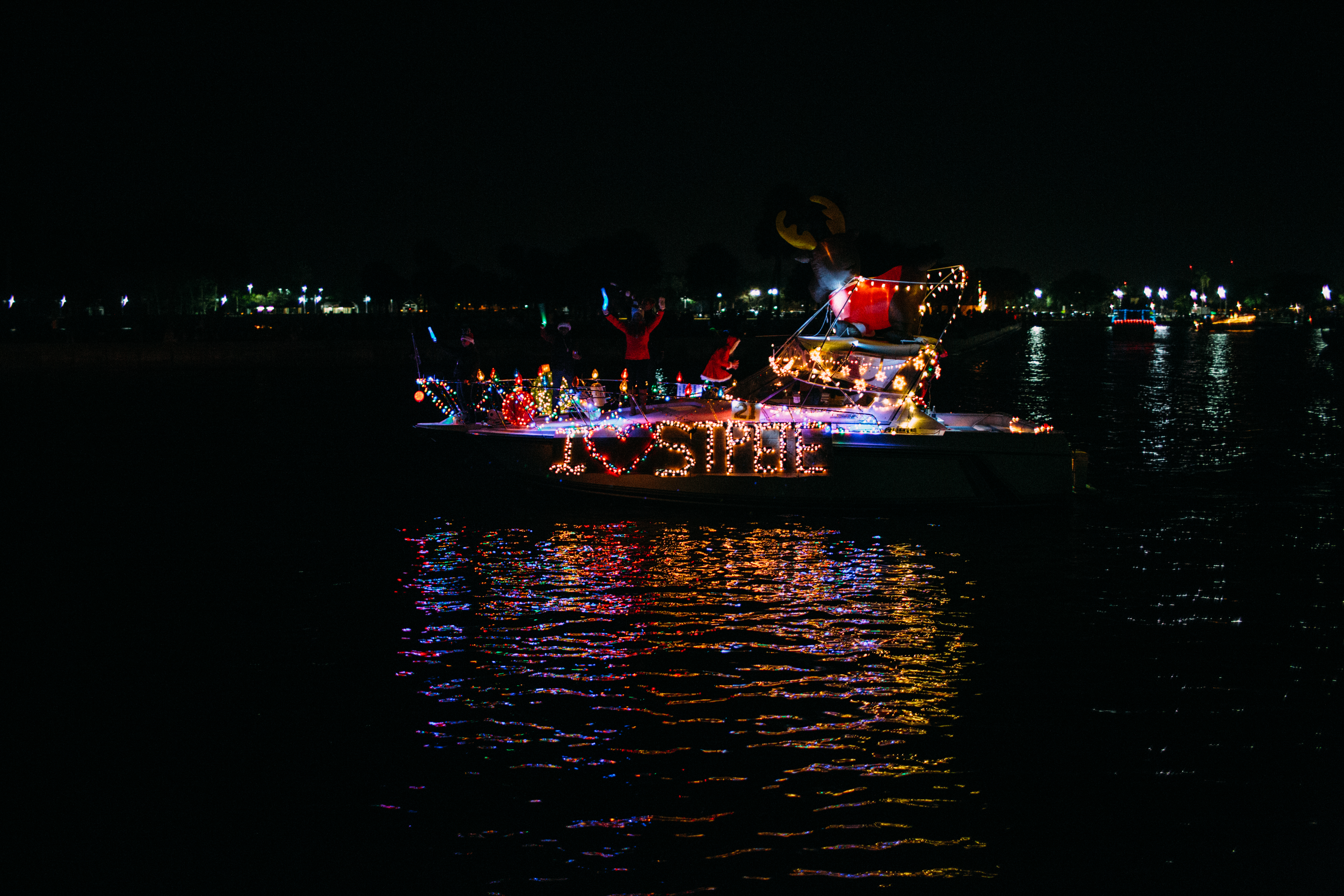 Next, walk across Beach Drive from the Vinoy to 400 Beach Seafood and Taphouse. On a weekday, you can order a drink and some appetizers and watch the flow of groups from the Vinoy looking around with oddly bewildered expressions, like they just arrived in the New World. If you don’t know where you’re going, Beach Drive is a feast for the senses. My wife and I like to play a game called, “Name That Conference.” These slow moving flocks have an unusually diverse makeup of races and ages. You’ll know it’s a conference group by the straggling middle-aged guy in a company polo, who forgot to remove the name badge from around his neck. We try not to stereotype – okay, that’s a lie – but a quick analysis of these packs will have us guessing, “non profits,” “techies,” “teachers.” And sometimes, after enough drinks, we’ll even get up the nerve to ask one of them what kind of group they’re from. My wife always wins.

Let’s move up the street to Moon Under Water, my kids’ favorite restaurant, where we’ve had our fair share of celebrity sightings. Back before the restaurant boom, the pinnacle of our sightings was Roseanne Arnold, riding around on the downtown Looper Trolley. She was dressed like a crazy cat lady, which left us unsure that it was her, until we heard that distinct nasal-y voice. But recently the city’s star stock has increased dramatically. In just the last year, from the patio of the Moon, we’ve seen actor/wrestler John Cena heading to Annata (very exciting for my son), and fashion designer Betsy Johnson (who I’d never heard of, but was a very big deal to my wife and all of her friends on social media). Next door, the Birchwood hotel boasts the best view in town from its rooftop Canopy bar. During a lunch on the patio we caught a prime people watching seat when Charlie Crist declared his candidacy for Governor or Senate or… something… in Straub Park.

The sidewalk opens up in front of the Parkshore condominium where a street musician is likely to offer a tune as you enjoy a cup of tea or a gelato. This is also where pets, from average to exotic walk their owners and you can hail a horse-drawn carriage.

When Tryst opened its doors, I must admit, I was doubtful it would catch on. Who is going to take their mom to a place called “Tryst”? But this is why I’m not in charge of restaurant/bar concepts. One night we were out with friends and squeezed into some seats in the outdoor lounge, when a man with a thick Eastern European accent started chatting up my wife (this happens). Before an hour was over, he had bought drinks for our entire group, including a bottle of Dom Perignon, and invited us to watch the Grand Prix from his yacht (which we didn’t do because we weren’t sure he’d find the locals so charming with their baby and toddler crashing the caviar bar). The friendly old guy was a billionaire who made his money in auto parts in Canada. I decided then that even though I’m not a billionaire, I must be doing something right if we’re hanging at the same watering hole.

How do you know that your city has truly arrived as a major tourist destination? Kilwins. Pumping smells onto America’s sidewalks since 1947. Moving on.

A personal favorite for me is Bella Brava. There aren’t many places we can dine like adults, and at the same time keep our kids entertained without bothering us or neighboring diners. Bella Brava’s sidewalk offers plenty of space, so that when friends pass by, they can chat for a few minutes without getting in the way. And this is also where I have to mention the Bird Guy. Without fail, a fellow with a tropical bird trolls the sidewalks, hustling diners. His game is to approach children and ask, “Do you want to hold my bird?” (What kid doesn’t?) And before you’ve blinked, your kid is holding a bird and this guy has his hands out for a tip. Okay, I get it, everyone needs to make a living – but I’ve seen too many uncomfortable exchanges when a visitor realizes he’s not just some nice guy out walking his bird. By the twentieth time we’d declined to hold his exploited fowl, he and my wife exchanged heated words. She’s now a hero among the wait staff and our children have learned a few new words.

I already mentioned celebrity sightings, and while I haven’t seen any stars at Cassis, I’m told this is where all the big time HSN people go to eat. Real Housewives, TV chefs (Emeril! Bam!), and soap opera actors. Perhaps I’m too distracted by their incredible duck poutine, but the thing I love about people watching at Cassis is the variety of languages. Russian, French, Portuguese, German – and they aren’t all tourists. This is the new St. Pete.

Bookending our half mile of interesting characters is Ceviche and their downstairs salsa club, “Che”. They’ve been doing tapas since you still had to explain to midwesterners the difference between appetizers and tapas (mozzarella sticks vs. gambas al ajillo). My friend Cesar likes to throw on a fringy vest and drag all his gringo friends out for Friday night salsa where we witness this Ecuadoran/Long Islander’s true superpower: Latin moves. But don’t just comes for Cesar’s prowess – there are some truly authentic, dressed-to-the-nines, octogenarians down here that will steal your girlfriend with their “bailando.”