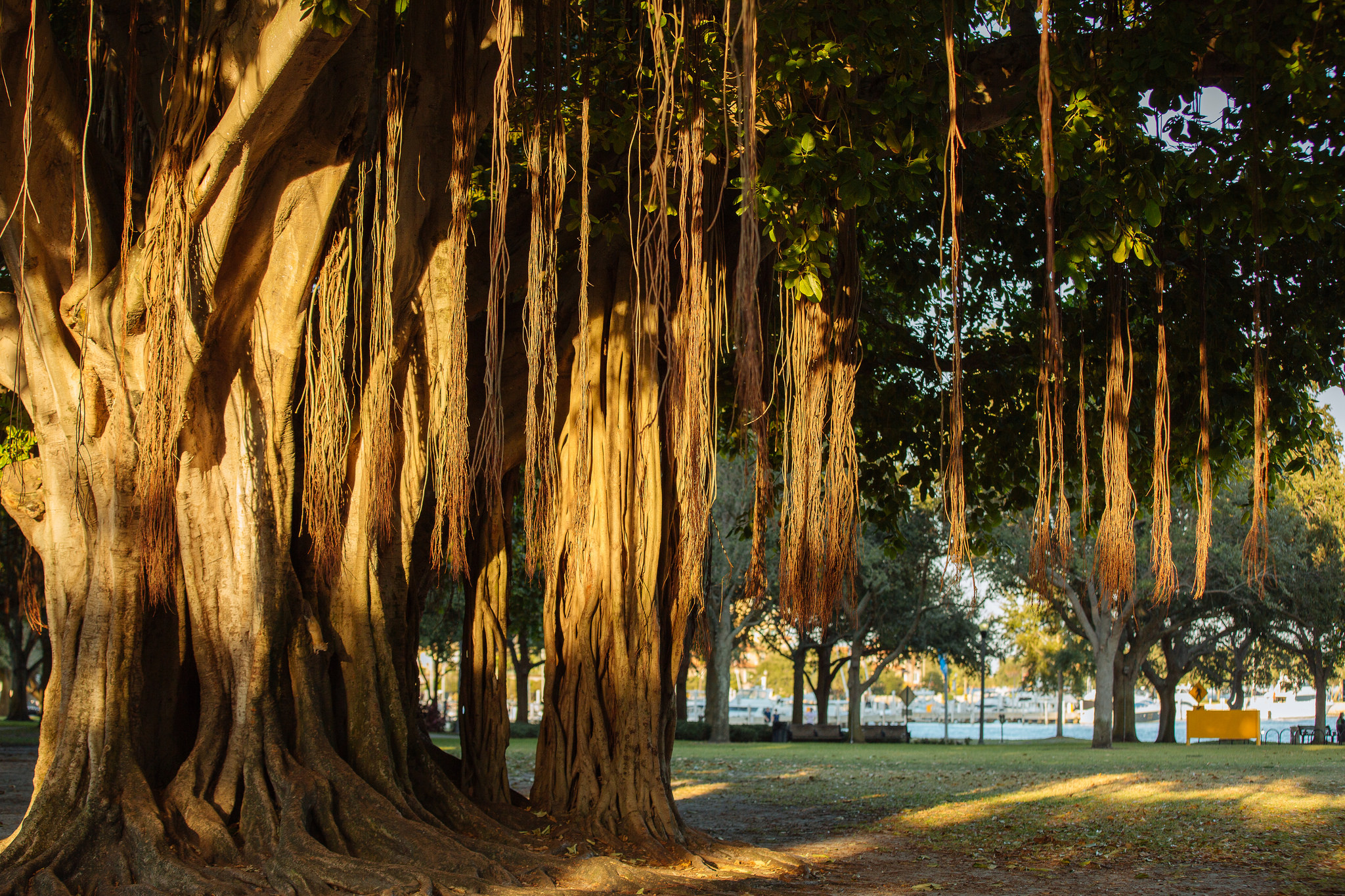 At least once a week my family wanders past North Straub Park after a meal and our kids begin requesting, or should I say, requiring a stroll over to the two sprawling trees next to the Museum of Fine Arts. Downtown St. Petersburg has changed a lot over the years, but one feature has stood firmly in the gateway to our waterfront: Beach Drive’s Banyan Trees.

Unlike almost every other tree, Banyans grow down instead of up. Notice the vines hanging from their branches. Once they reach the ground, they will take root as a new trunk supporting its weight. You won’t find many Banyan’s further north than these, as St. Pete’s unique position between the bay and gulf provide the tropical climate they need year round. It’s hard to talk about Florida’s Banyan trees without mentioning their celebrity origins. Thomas Edison planted North America’s first Banyans in Ft. Myers in 1925 when Harvey Firestone gave him a specimen as a gift after a trip to India. That sapling now covers over an acre on the famous inventor’s estate. Fortunately, Edison had room for it.

Arguably, St. Pete’s most photographed feature, the Banyans are constantly changing throughout the day. In the morning, the sun’s rays filter through our humid air in multiple shafts of hazy light. Mid day, the canopy offers a shroud from summer’s oppressive heat and shelter in a rain shower. And at night, despite the bustle of neighboring restaurants and the steady traffic of passersby, there is something spooky about them as long shadows conjure the feeling of something hidden within its thick foliage. And sometimes there is, be it a shoeless busker playing a guitar a story up, or a couple on a first date carving P + L into it’s contoured trunk. While I never advocate scarring a tree’s hide or swinging like Tarzan from a hanging tendril, I understand the irresistible urge.

From above Beach Drive, the Banyans stand out against their oak neighbors, their leathery leaves glowing a bright green so solid that it looks like you could walk right over their tops.
From the time my son was learning his first words, he was enamored by these mystical epiphytes, as he asked confidently to go see the “Ballerina Trees.” I’m not really sure why “Banyan” became “Ballerina,” but it stuck, and for years we called them the Ballerina trees in our house.

Then our daughter came along and since the time she was old enough to navigate the rooted terrain, we’ve been playing “hide and seek” in the network of trunks. I would love to get a look at some of the wedding and engagement photographs my kids have photobombed over the years. It’s fun to see visitors marvel at them and know that, like this city, these trees are uniquely ours.

Great cities and towns have great open spaces. What is the Upper East Side without Central Park? What is Paris without the Tuileries or Luxembourg Gardens? Proof that our parks are the reason for all the people visiting, living and dining downtown can be seen in neighboring cities where downtowns turn ghostly after dark. Beach Drive is special because of the parks and thanks to the forethought of someone ninety years ago, we have the Banyan trees that capture the imagination of everyone who sees them.